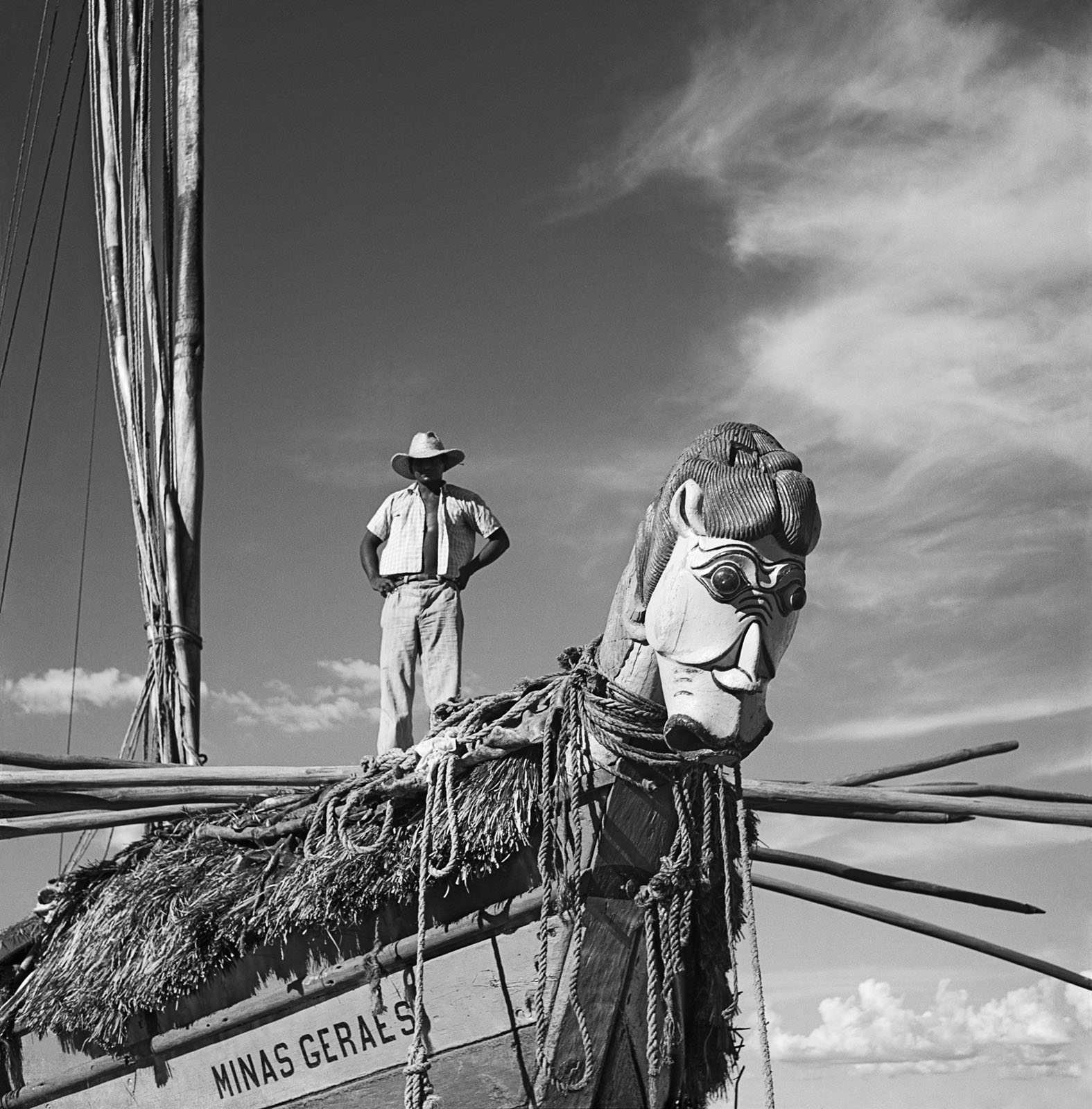 French photographer Marcel Gautherot (1910-1996) spent most of his life in Brazil. He produced an extensive body of work, photographing his adopted country. Travelling throughout Brazil, he produced images of extraordinary aesthetic quality in two of his chosen domains − ethnographic and architectural photos.

Parisian, the son of a working father and a seamstress, at the age of fifteen he enrolled in the evening course of the École Nationale Supérieure des Arts Décoratifs, beginning to work with interior design and architecture. In the 1930s, he worked as an architect and photographer at the Museum of Man. He worked together and collaborated with members of the Alliance Photo photographic agency, such as René Zuber, Emeric Feher, Pierre Boucher and Pierre Verger. In 1936, the Museum of Man sent him to Mexico and, in 1939, to the northern region of Brazil (Amazonia and Pará). When the war broke out in Europe, he was summoned to join the French army in Dakar and, after the Armistice, returned in 1940 to Brazil, where he established his career as a photographer in Rio de Janeiro.

In this city, which was then the country’s capital, Gautherot soon became part of a circle of Brazilian intellectuals and artists, similar to the one he had in Paris in the 1940s. Names such as Rodrigo Melo Franco de Andrade, Carlos Drummond de Andrade and Lucio Costa, got together in the head office of the Service for the Protection of Historical and Artistic Heritage (Sphan) to promote the preservation of Brazil’s colonial heritage as well as to consolidate modern architecture in Brazil and build a national identity.

Marcel Gautherot´s trainning as a an architect and interior designer led Lucio Costa to commission him, in the early 1940s, to organize the collection and permanent statuary exhibition of the newly constituted Museu das Missões in Rio Grande do Sul. Gautherot then became a permanent collaborator of Sphan and traveled around the country photographing historical buildings, folk festivals, crafts and folkloric activities in several Brazilian states, mainly in the Northeast region. These works also led him to collaborate with the Folklore National Commission (created in 1947) and the National Folklore Defense Campaign (launched in 1958), both headed by the historian Edison Carneiro.

At the same time, he became the main photographer of modern architecture in the country, focusing in particular on the recording of the great projects of Oscar Niemeyer, such as the Pampulha architectural complex and the construction of Brasilia. With Niemeyer he maintained close and lasting friendship and collaboration, marked by aesthetic and political affinities, in a relationship very similar to the collaboration between photographer Lucien Hervé and the architect Le Corbusier. With Burle Marx, Gautherot had established a collaboration of decades, recording extensively the main works of the great master of Brazilian landscaping.

The work of Gautherot played a fundamental role in the construction of a Brazilian imaginary. His great documentary project – carried out over more than fifty years of activity in Brazil until his death in Rio de Janeiro in 1996 and consolidated in iconic images that integrate his collection of more than 25,000 photographs, now preserved in the Moreira Salles Institute – mapped, documented and interpreted the plot of territory, tradition and invention that shaped modern Brazil.

This retrospective exhibition of Marcel Gautherot, held during the 80th anniversary of IPHAN in the Paço Imperial do Rio de Janeiro, a symbol of the struggle for the preservation of Brazilian heritage, is an important tribute to his profound legacy in the field of photography, promoting, simultaneously, the reunion of his work with the origins and protagonists of this heritage project so essential for the country and its culture.

The Brazilian heritage protection agency, Instituto do Patrimônio Histórico e Artístico Nacional (Iphan), in partnership with Instituto Moreira Salles, is most honored to celebrate its 80th anniversary with the exhibition Marcel Gautherot – Brazil: Tradition, Invention. Gautherot collaborated with the institute for five decades, leaving a legacy of incalculable value in the form of photographic records of what we today understand and preserve as Brazilian cultural heritage.

This artist’s importance resides in his capacity for foresight. Long before the discussions that took form in the 1988 Constitution, Marcel Gautherot spent time in north and northeastern Brazil, discovering the regions’ tangible and intangible assets, which were listed individually or in groups, epitomizing the identity, actions, and memories of the different groups who have formed Brazilian society. Gautherot came into contact with the lives and people from the historical towns of Minas Gerais. In Rio de Janeiro, aside from its carnival and landscape, he also photographed its contemporary architecture. And in Brasilia he found fertile terrain for the full expression of his art: tradition and modernity combined in the construction of a heritage and a city.

Alongside this breadth of subject matter, which encompasses the rich diversity of Brazilian culture, the photographer was one of a group who realized the importance of preserving for future generations the cultural assets that helped shape the identity of the Brazilian people – be they buildings, historic towns, festivities, or other forms of expression. It was thanks to the dedication of people like him, committed to this cause, that a policy for Brazilian cultural heritage was eventually institutionalized.

In 1937, when the forerunner of Iphan, Serviço do Patrimônio Histórico e Artístico Nacional, was taking its first important steps, Gautherot was already working for Musée de l’Homme in Paris. In 1940, after photographing part of the magical universe of Mexico and crossing the Amazon – both journeys in the service of the Paris museum – he decided to move to Brazil, where he settled in Rio de Janeiro. But he was also keen to know the lands of Jorge Amado – Salvador and the inland Recôncavo region of Balduíno and Jubiabá, characters from Amado’s 1934 novel, which unleashed the extraordinary power of Afro-Bahian culture across the world, Brazil included. In Rio de Janeiro, Gautherot was introduced to the great Rodrigo Melo Franco de Andrade, and it was not long before he joined the ranks of the supporters of heritage and selfless civil servants devoted to the service.

The way his trajectory is intertwined with the growing appreciation of Brazilian culture and the sheer breadth and beauty of his work make Marcel Gautherot deserving of special mention amongst the artists who were part of this movement that raised the banner of Brazilian culture, history, and memory. It is hoped that this exhibition will help divulge not only the significance of his body of work, but also the untold value of the culture it reveals.