This form of intervention informs the concept of constellation expressed in the show: to exhibit works that, despite their considerable differences, poetically investigate the tension between hand- and machine-made that first emerged in the early Industrial Revolution towards the end of the 18th century.

Today, high-tech electronic devices have invaded every sphere of the daily life of a significant portion of humankind, reducing manual labor almost to the act of typing. Many artists have reacted critically to this trend, producing radically contemporary artifacts without abandoning or turning their back on the mastery of manual crafts. Such is the case of all Jeferson’s works in Media Constellation.
This exhibition maps out three periods that mark essential changes in the artist’s work process. From 2013 to 2015, his first interventions focused on treating individual objects. Basically, they consisted of producing veneers for typewriters, calculators, record players, records, gas canisters, television sets, etc. In 2015, he started making installations by accumulating identical cathode ray tube television sets covered with marquetry of strips of black and white wood arranged in such a way as to form a pattern similar to the “snow” often seen on these old television screens. 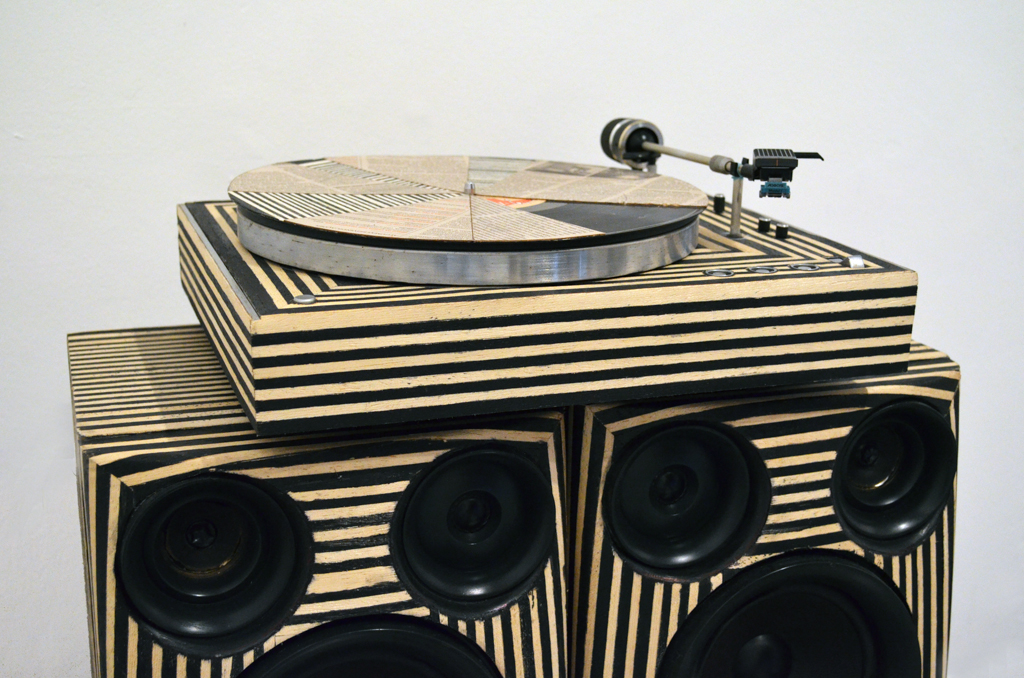 Lately, Jeferson’s media objects have undergone quite major transformations. The most recent works are no longer restricted to the functional use for which they were designed, insofar as the objects are given new functions unrelated to their original purpose. Such is the case, for instance, of two record players whose turntables turn together, connected by a wooden measuring stick that unites and deconstructs them (media object 3027), or the car windshield wiper blade that moves over a TV screen (media object 3030).
Nonetheless, we should stress that there is nothing backward-looking in Jeferson’s critical poetic, since it does not propose a nostalgic retreat to the pre-industrial era. Rather, his criticism is directed against the Manecheism of the blind followers of the technological revolution, not the new technologies themselves.
By doing marquetry on outdated devices, Thomas Jeferson combines in a single object what current repertoires tend to separate into either artisanal or manufactured. This combination bridges the gap and integrates them in new poetic devices.